The Salish Sea is an area of spectacular beauty, biologically diverse marine waters, and rich cultural history. The international sea includes the Strait of Georgia, the Puget Sound, and the Strait of Juan de Fuca in British Columbia, Canada, and Washington State, United States. Vancouver, BC, and Seattle, WA, anchor the northern and southern portions of the ecosystem and provide dynamic economic growth and highly urbanized environments. As an international inland sea, the marine waters are managed by Canada, the United States, the Province of British Columbia, the State of Washington, over 65 Tribes and First Nations, and many local jurisdictions.

Politically the Salish Sea is governed by the USA and Canada, but the international boundary separating the Puget Sound Basin (USA) from the Georgia Basin (Canada) corresponds to no natural barrier or transition, meaning the border is invisible to marine fish and wildlife. 38 mammal species, 172 birds, 2 reptiles, and more than 3000 macroinvertebrates all live in the Salish Sea. 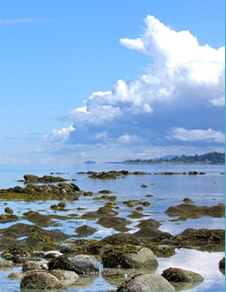 The Salish Sea name recognizes the Coast Salish peoples who were the sea’s first stewards and who have lived here since time immemorial. Over seven million people now live, work, and play in the Salish Sea watershed. We benefit from the area’s rich natural resources and deep culture.

The Coast Salish are the indigenous peoples who live in southwest British Columbia and northwest Washington along the Salish Sea and share a common linguistic and cultural origin. The Coast Salish are seen as one of the main cultural and linguistic branches of a larger group known as Salishan or Salish. Five divisions of the Salish language family are recognized, with Coast Salish and Interior Salish being the primary two. The Salish family consists of 23 separate languages.

The Coast Salish, Nuu-chah-nulth, and Kwakwakaw’akw people have long navigated the waters of the Pacific Ocean around Vancouver Island. They share their deep, respectful relationship with the bountiful ocean and temperate rainforests.